And he did like it. The sun shone every day from six in the morning till six at night. It was warm and happy, not cold and rainy; although almost everything was different. There were no postmen or milkmen. You had to fetch your letters from the post office and only the big supermarket sold fresh milk. Instead, people used powdered or tinned. And some of the buses were so old and battered, they had blinds instead of glass for windows.  When Mum told Micky they had to stay in a hotel until their baggage arrived by boat, he didn’t believe her. Every day he asked when the furniture lorry was going to bring his books and games. Finally, Dad decided to take Micky to the port to see the ships dock.
‘You see, Micky,’ he explained as they watched the men unloading wood from a cargo boat, ‘this is a very small island. Instead of using lorries to carry goods from town to town, the people here use boats to deliver goods from island to island.’
On the day the boat carrying their baggage was expected, they went down to the harbour to watch it dock; with dozens of men running around with ropes and chains to secure the ship. Then Micky really did believe in a furniture van which sailed on water. But he still couldn’t get his toys.
‘They start unloading tonight and Customs will clear them tomorrow, so let’s go early.’
They set off at seven with Mr Wells clutching a large bundle of papers. First, they went to one office to get some papers signed, then they went to another office where more papers were signed; and there were so many papers and so many offices that it took all day! But, finally, everything was sorted.
‘I saw green bananas being put on a huge boat,’ Micky told his mother that evening. ‘It’s called a Geest Boat and it comes here every Tuesday. And everyone was very kind, they gave me a Coke and a fish sandwich for lunch – it  was great.’
Mrs Wells stared at Micky in astonishment. ‘But you hate fish, Micky.’
‘Do I?’ said Micky. ‘Don’t think so, Mum. You’ve got  me mixed up with David.’
There’s no doubt about it, thought Micky. This is a great place. Everything’s great – school’s great – the food’s great – and the beach is really great – and soon I’ll be able to swim.
School was a terrific adventure too, except that he didn’t much like the cane the teacher carried.
‘In England,’ he boasted proudly to his new friends, ‘you can only get detentions and you have to do something really bad first.’

But after three months the sun was still shining, the people were still friendly, school was okay, the beach was still there – and he still couldn’t swim. Bored and miserable, Micky mooched around the house.
‘Why can’t I come to the beach with you and Penny?’ he asked David, as soon as he got in from school. ‘I promise I won’t be a nuisance.’
‘Because you’re too little.’
‘That’s not fair. You said I was too little when I was seven. I’m eight now.’ ‘And, you’re still too little.’
David stuck his tongue out. ‘Come on, Penny, let’s go before the nuisance breaks into tears.’
‘Mu-um will you take me? I’ve nothing to do.’
‘Sorry, Micky, I’m just too busy today, we’ll go on Saturday.’
‘I hate being eight; it’s just like being seven. I’m still too little to do things. I hate Barbados. I want to go home to England,’ he grumbled.
‘Oh, Micky, not again,’ his mother groaned. ‘I can’t bear it. If you’ve said that once, you’ve said it fifty times. For goodness sake go away and play.’
Mrs Wells didn’t mean to speak so sharply. Micky stormed out of the house slamming the door behind him. He plunged into a chair on the veranda, staring moodily at the garden, and kicked his feet in the dust. It wasn’t fair always being the youngest. No one loved him and he had nothing to do in this mouldy old place.


Then he had a most brilliant idea. He’d go back to England. The more he thought about it, the more brilliant it became. All his friends were there and Gran and Granddad. They’d be pleased to see him all right AND they let him do stuff AND they never got cross with him AND they didn’t nag. But where could he find a boat? Micky frowned. Bridgetown harbour had lots of boats but if he went there he might bump into his dad, or one of his Dad’s friends, and THEY would want to know what he was doing on his own. Suddenly, he remembered the small fishing town they had passed as they drove in from the airport. He’d seen lots of boats there. ‘I bet one of them will take me to England,’ he muttered. So that was that. He’d go. Micky stuck his head through the kitchen door. His mother was busy cooking and didn’t look round. ‘What do you want now, Micky?’ ‘I don’t want any dinner,’ he announced. ‘I’m going back to England, so there.’ ‘Yes, do that, dear,’ said Mum, not listening to a word he said. Micky slammed the door shut. That’s that then, he thought. And set off for the bus stop. 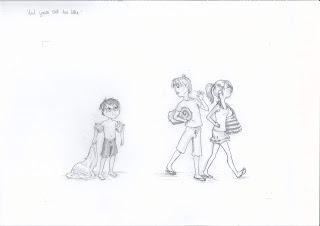 at August 05, 2018
Email ThisBlogThis!Share to TwitterShare to FacebookShare to Pinterest