A Fishy Tail - Chapter 2 - Islands in the Sun 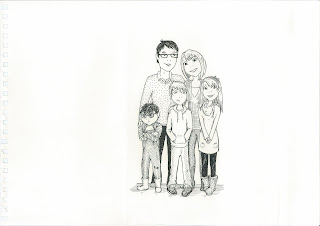 The great day arrived. Micky was so excited he could hardly eat his breakfast. He watched for the taxi to take them to Heathrow Airport, his nose pressed against the windowpane. And he asked, at least a hundred times, ‘Mum, when’s the taxi going to arrive?’
At last, with a screeching of brakes and a loud blast from its horn, the taxi pulled up at the front door. Next minute, the family were off. Micky stared out of the taxi window, his nose pressed against the glass, watching to see his first airplane. And he asked, at least a hundred times, ‘Mum, will we be there soon.’
‘Look a plane,’ he shouted suddenly, making them all jump. ‘There it is, see!’ Micky held his breath as the monster climbed into the sky, trailing exhaust fumes behind it.
The airport would have been exciting even if Micky hadn’t been catching a plane, with people there from every country in the world, many of them wearing clothes quite different from Micky’s jeans and jacket. He kept asking David, ‘Where does that man come from?’ and ‘Where’s  that?’ because most of the countries he’d never heard of: Kenya, Nigeria and Sudan.
They checked their luggage and, once their flight had been called, walked down, what seemed like, a million identical corridors – all with moving-walkways. They walked so far that Micky began to wonder if they were walking to Barbados.
‘It’s huge,’ Micky whispered to his brother as they finally boarded their plane. ‘It’s bigger than our house.’
Actually, the plane was bigger than four houses. And, by the time Micky had explored, watched the stewards serve everyone a drink, it was time for lunch. He ate every bit, it was so delicious.
‘Micky you’ve eaten your carrots?’ His mother pointed at his clean plate. ‘But you never eat carrots,’ she continued amazed. ‘You don’t like carrots.’
‘Oh, I like carrots now,’ he said. ‘I just didn’t like English carrots.’
Mrs Wells was speechless. She glanced at her husband who grinned happily at her and carried on eating.
‘Told you so,’ he whispered between mouthfuls.
The journey was really long and took nearly nine hours. David, Penny, and Micky played cards, read, watched the movie, slept a little, and listened to their radios. Gradually it got warmer and, just as Micky was beginning to think they never would arrive, the Seat Belt sign flashed on. The plane began to descend; hardly noticeable at first until Micky felt his ears go pop. Then, with a series of horrendous groans and thumps, the wheels dropped into place. The plane banked tilting sideways and, through the small porthole window, Micky caught sight of the sea. He couldn’t believe his eyes. It was blue exactly like the pictures his dad had shown him, deep, deep blue. And he could see straight down to the bottom.
‘Can I go in the sea straight away?’ he shouted, trying to bounce up and down in his seat with his seat belt fastened. ‘It looks smashing, ever so friendly, not like the sea in England which looks cross.’
‘Micky, you are just like the sea,’ his mother laughed at him. ‘You’re always cross in England, too.’
‘Can I, Dad?’ he said. ‘Can I go in the sea straight away?’
‘Not today, Micky. You’ve got a whole year and the sea will be there tomorrow, just as friendly.’
The big jet touched down onto the tarmac, its engines screeching loudly as it slowed down. It taxied across the runway, following a truck on which were painted the words, Follow Me. They arrived at their parking bay and the engines died away.
By the time the crew had opened the doors, most of the passengers were already out of their seats, blocking up the aisle. Out of the plane they rushed into a burst of warm, sunny wind. Down the steep flight of steps, across the tarmac, with its black and white zebra crossing, and into the terminal. No moving pavements, only trees and flowers and the bright colours of sunshine.
‘It’s not like England, is it?’ Micky whispered to Penny who was walking beside him.
‘No,’ she whispered back. ‘But it feels very comfy not strange at all.’
‘Wow!’ he exclaimed. ‘That’s exactly how I feel.’
The Arrivals Hall was hot and sunny with lots of people and lots of queues. Finally, it was Micky’s turn to cross the big red line in front of the Immigration desk. He handed his passport to the officer.
‘How long are you staying?’ The tall man in a white uniform peered down at him.
‘A whole year,’ Micky boasted. ‘My dad’s come to work here. Is a year a long time?’ he asked as the officer handed him back his passport.
‘Yes, sir. A whole long time. Long enough to get a nice tan and take plenty of sea baths.’
They smiled at one another, and Micky moved on.
‘I like Barbados,’ he announced as they waited for their luggage. ‘I’m going to like it very much indeed.’ 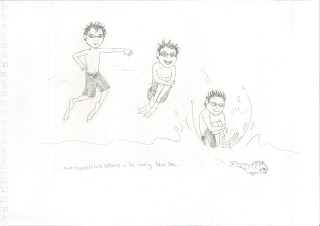