The Golden Age of Reading 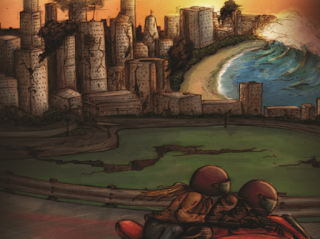 One of the benefits to growing old is an ability to glance back over one's shoulder at a huge span of time to which is added a certain amount of gloss as if a duster and spray polish have been used. Nevertheless in terms of literature whereas the early naughties mostly belonged to JK Rowling, the rest especially the years from 2008 to 2015 were undoubtedly the golden age of reading as far as young adults were concerned.

And my thrillers Running, Time Breaking and Turning Point were part of this, and their suceess took me, almost every Saturday, into a Waterstones store where I had been invited for a book signing.

Living in the county as I do, most often that meant a 6 am start to catch a train from Bath. (Lovely in summer but not so pleasant in the winter when trying to cross the Mendips in surroundings solid ice and the windscreen completely fogged up. Even so, I much preferred to drive particularly if it was a straight forward run and the store not too far away, perhaps Plymouth on the south coast or Cheltenhamm in the Cotswolds, becasue then I could set out at a more reasonable hour with my trusty thermos flask full of coffee at my side to make sure I arrived by 10.30 for an eleven am start.

Why the golden age of reading for YA's? Because these were the years teenagers read and loved books. Of course that was before mobile phones destroyed both their concentration and an ability to get out of bed before noon, to visit the town shops including Waterstones. And stores catered for this mass of young people - vast bays set aside marked YA rather than the paucity of shelving that you find today in stores and libraries .

I remember on one occasion, a girl spent 3 hours in Waterstones and read an entire book - and no she didn't buy it.

The phenomenon orginated with a series of amazing writers who picked up the vampire ball and ran with it. Yes, maybe vampires had been around since Bram Stoker's Dracula in 1897, but in a very modest and low key way. Then in 2005 Stephanie Meyer stepped into the limelight with Twilight followed by a swarm of YA fans. But it was Cassandra Clare who first brought Shadow Hunters to our attention, and Maggie Stiefvater who introduced the shape-shifting wolves in Shiver. And let's not forget The Hunger Games by Suzanne Collins!

Seated in a chair in the middle of the store, I was ideally placed to watch teenagers drag their reluctant parents over to the shelf which had The Hunger Games on it. 'You have to read this,' they exhorted. And parents did and they loved the series equally as much as their children had. That is the astonishing thing about YA books, they appeal to all ages.

At the same time Rick Riordan was introducing us to Percy Jackson and the gods of  Mount Olympus and Anthony Horowitz to Alex Rider, and Barbara Spencer to Scott Anderson.

If you haven't yet read Running the first thing you should know is that it is as true today as it was then, with the UK reduced to island status and EuropeTop Dog - the big banana - the bossman. And a computer virus, Styrus, so powerful it can penetrate any computer and steal its secrets. Of course everyone wants to get their hands on it, especially those who want to rule the world and  don't much care how they go about it. (But you need to read Turning Point to find that out.) (And by the way, I dedicated the book to my daughter because she sat up all night reading and I hadn't given her the last chapter! I won't mention her language on that occasion - that too is the subject of another story!) 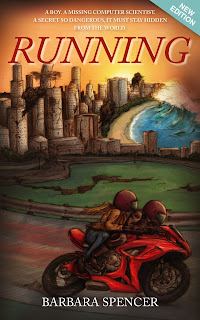 This is the blurb:

A Boy. A Missing Computer Scientist. A Secret so dangerous it must stay hidden from the world.

When Bill Anderson disappears, Scott is determined to find him. He has already lost his mother. She disappeared in the California earthquake, when ninety percent of the world’s computer scientists were killed; a tragedy for which America is held responsible. But there’s little for Scott to go on, a scrap of paper left in a printer and a poster pinned to the wall.

And now someone’s looking for Scott, too.

I found my Saturday forays into the world of Waterstones quite thrilling and between signing copies of my books, I would chat to customers or sift through the books on the shelf. And it was at a book signing that I met two of my cover artists: Jessica Carreras and Katie Beltrami. Aimee Hibberd who designed the cover for Running, I met in a field. Don't ask - that's the subject of another story. 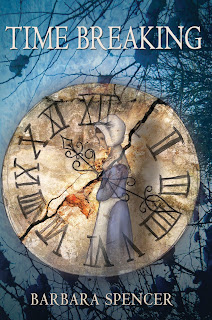 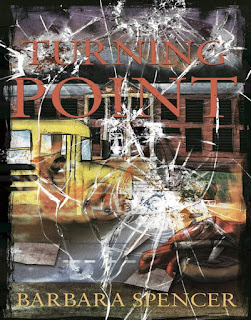 I stil find it sad that most teenagers bow  to peer pressure when they reach secondary school and they stop reading. 'It's not cool,' is the reason they give when I ask. And their teacher will say, quietly, when no one is listening, 'Some do still read but they won't admit it.'

How sad, if only they knew as I do that as you go through life and age ... and we all age ... reading becomes the most delightful and satisfying of occupations - especially at night in bed. Then it's wonderful.