Today, May 17, with lockdown once again lifted and people able to dash off to shops without feeling a sense of guilt, 'but I only went to the supermarket,' the burgeoning sense of free is creating a somewhat light-headed, dizzy state. With that in mind, and with the lure of shopping once again paramount, and because we can travel and visit different parts of the country, I thought I would republish an article from 2018.

If the City of Bath is synonymous with Jane Austen, the Somerset town of Frome is synonymous with the wool trade, which began in the 14th century, the last representative of the trade finally closings its doors in 1995. Dating back even further is a tradition for fairs which began in 1270 with a licence for a single fair, graduating in 1492 to hosting three annual events. What a record over 700 hundred years! Now held monthly, the popularity of the market attracts sellers from France, and closes the main car park and main street from 8 am, an army of officials co-opted to cope with the influx of tens of thousands of visitors. They even run a Park & Ride Service. 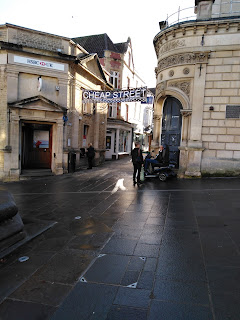 Except, today I’m not researching the fairs or even the history of Frome but directing my footsteps to a bookshop, one of a brave but dwindling band that pepper the small towns and villages of our countryside. This particular bookshop is Hunting Raven, and it just happens to be situated in the most perfect example of a medieval street, Cheap Street, once known as the Ceap, where archery was practised. Hunting Raven is now part of a chain of three shops, Winstones, the other two in Sherborne and Sidmouth.
Do you ever think about Amazon or like me, do you simply, and almost daily, dial them up, clicking on the item you want to purchase? So stop and think now. To me they are the Goliath of the book world and the tiny independents, David with his slingshot. Amazon published over one million titles last year and it is because of them, that our bookshops are struggling to survive. How can anyone, let alone an independent bookseller survive against that power? Look at what online shopping has done to our city high streets?
I for one believe the majority of Independent booksellers will survive because they offer something Amazon cannot. Push open the door of your local bookshop into a world of imagination, where you can browse at your leisure through a cornucopia of gloriously coloured book-covers that evoke the smells and excitement of childhood. How can the Internet with its fake news and aggressive marketing compete with that?
By all means use Amazon for E-books and audios, but not paperbacks! If, like me, you buy one at a time, search out your nearest independent bookshop and wander in. If you've never pushed open the door of one of these magical enterprises, prepare to be amazed by their range and selection. (It’s rather like The Toy Makers by Robert Dinsdale, where the inside of an object can be larger than the outside.) And if it’s a particular title you are looking for and they haven’t got it, they will have it in stock in 24 hrs because wholesalers deliver daily. Which means you can repeat this wonderfully satisfying experience the following day.
And feel good about it. Like the dollar you give to charity, you are helping an ancient craft, which began with Caxton around 1472, to continue its existence.
Yes, I know Waterstones are bigger and may have the book you are looking for without waiting 24 hours, but they will survive simply because they can negotiate huge discounts with publishers. Haven’t you noticed that every Waterstones shows the same titles in its windows? Besides, these medieval towns like Frome and Sherborne are far more exciting than our city streets that are swamped traffic. 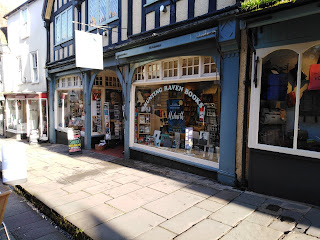 If you like markets and have already decided to go to Frome for the next one on December 2nd, pop into Hunting Raven and browse their books. When you emerge, you have a choice; head back into the market or into the café opposite and open the pages of yur new book with their promise of adventure, magic and escapism that will last for days.

I don’t live in Frome. My quickest route is over the Mendips weather permitting. These picturesque hills create quite a formidable barrier in winter when they are dogged by mist and ice. But come Saturday, 24th November, whatever the weather is doing, I shall be in Frome at Hunting Raven with my latest novel: The Year the Swans Came. Written for adults/top teens and published in time for Christmas, it is a magical fairy tale. Please push open the door and say hi!

Barbara Spencer
First published in Fashion Magazine in 1969, Barbara Spencer embarked on a highly colourful career spanning three continents in which she was caught up in riots, wars, and choosing Miss World. An Award-Winning Author in three categories, Children, YA, and Historical Fantasy, Barbara’s has just completed a five-book project, which includes The Year the Swans Came and The Click of a Pebble. 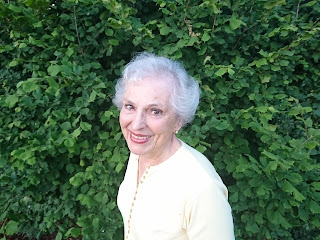 at May 17, 2021 No comments:
Email ThisBlogThis!Share to TwitterShare to FacebookShare to Pinterest
Newer Posts Older Posts Home
Subscribe to: Posts (Atom)