This time the enemies are making sure no one survives in Barbara Spencer's Turning Point, the explosive sequel to Running


When fans demanded a sequel to Running, I was only too happy to oblige. Set in the 21st century, Turning Point portrays a world which we may very easily come to inherit. One dominated by money and greed, with Europe a major world power and England reduced to island status off the coast of Europe, in which the little guy stands no chance. 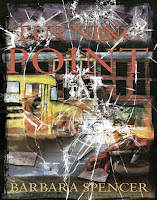 The action-packed Turning Point follows Scott Anderson and Bill, one of the scientists that created Styrus, as they head for Geneva where Bill is to address the United Nations and formally hand over control of the computer programme. Meanwhile Mr. Smith, despite a massive manhunt by the American Secret Service, continues his meteoric rise to power, driving global corporations into bankruptcy.

When Scott accidentally overhears a secret conversation, the mirage of calm and safety that his family and friends have tried so hard to create is shattered forever. Within forty-eight hours, Scott has become a wanted criminal, accused of gunning down an innocent bystander; his bodyguard, his home, and his father all gone. With only his school friends believing in his innocence, Scott heads for Exeter on his motorbike to the headquarters of the American Secret Service only to find that destroyed too.

lrd.to/Turning-Point
Email ThisBlogThis!Share to TwitterShare to FacebookShare to Pinterest