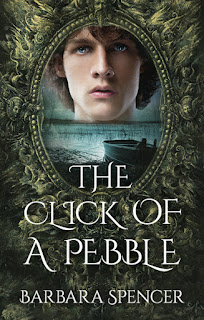 
We all remember Rhett Butler, played by Clark Gable in Gone with the Wind – at least those of us over forty do. And who can forget Jamie Fraser of Outlander or Edward Cullen – not so much – of Twilight and The Darkling from that wonderful series by Leigh Bardugo, The Grisha?


As for girls – you’d have to go a long way to improve on Katniss Everdeen from the Hunger Games series – the name Everdene (note the different spelling) of Thomas Hardy fame. Although I don’t think any us were over the moon about Bella, also from Twilight by Stephanie Meyer.


I confess to becoming very appreciative of Griet, the servant girl and the narrator in Tracy Chevalier’s Girl with a Pearl Earring, unconsciously basing the character of Maidy from The Year the Swans Came on her.

It’s difficult to write a gentle character in novels – critics either love or hate them, as I learned to my cost. The character of the narrator, Magrit (Maidy), came in for both praise and criticism; the doubters disliking her steadfast and ‘non-pushy’ nature. In my defence, she was never intended to become the main characters - that was Ruth, a beautiful but selfish and self-centured young woman and it is her actions that precipitate the tragic happenings of this story. Nevertheless, readers decided Maidy was really my heroine and this decision by them throws into prominence the gentleness and forbearance of her character. Not in themselves great characteristics but they have given her an army of fans.

I quite realise the fashion for strong women who dominate the action and for some young people, anything else is not acceptable BUT ... the very fact that you dislike them speak volumes for the author’s ability to write. 'The Year the Swans Came' provoked some serious criticm of Maidy by young readers who thought of her as a doormat and almost shouting at her character to retaliate when Ruth was beastly. Not preaching here, but authors usually have a good reason for creating a character in a certain way and to make that way convincing means they have succeeded. When readers told me they grew actively to dislike Ruth, I was thrilled. Nevertheless, I always feel sympathy for her - if you read the novel you will discover where I am coming from.

The long overdue sequel to The Year the Swans Came will be out at the end of April. There will have been a gap of two and a half years between the writing of books 1 and 2, and in the novel three years have passed. I loved the writing of it, discovering the many changes in our characters' lives. And yes, Maidy and Ruth are in it – so we will see. Which brings me neatly back to guys and to Zande:


I didn’t need to look round. For the past two nights Zande’s voice had echoed through my dreams; only now its dissonant base tones had been replaced by a light-hearted dance step.


‘It’s Magrit, isn’t it? How extraordinary! Great minds do think alike, after all.’


Obviously with years and years of both reading and writing behind me, people I have met and books I have read must have influenced writing. Yet, never before have I created characters so vividly alive, I could imagine looking out of the window and seeing them. Particularly Zande.
Is he the hero or the anti-hero? Unfortunately, you will have to wait for the next book to decide. Nevertheless, as Zande powers his way through The Year the Swans Came, with overweening vanity he also demands I acknowledge his presence in the trilogy, Children of Zeus, and that is what I have done. The pages of the first book, The Click of a Pebble, open onto a massacre when Zande, aged four, learns that his mother has been killed.

In this three book series there are several unforgettable characters - the most outsteanding of these being Yöst. He takes centre stage both in The Click of the Pebble and An Ocean of White Wings. Equally as stubborn as Zande, although in a very different way, he has eased his way into my heart and the hearts of those who are even now meeting up with him for the first time. This is what the Net Gallery reviewer says:


Joscelyn S Reviewer on Net Gallery. This was a great coming of age fantasy story. I really enjoyed seeing these young characters struggle to survive in the aftermath of the massacre that leaves them only each other to depend on. Their journey drew me in and had me reading this entire book in one sitting, I'm looking forward to reading more books set in this fascinating world. 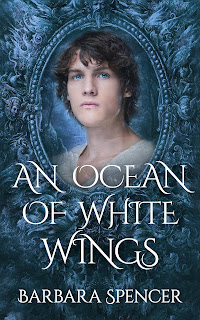 Only one review so far, but it is incredible: This is a story that touches the heart and stays in the mind long after finishing reading it. Although I finished it two days ago, I find myself still thinking about it and feeling again the emotions aroused by the author’s skill in writing. I found myself fully immersed in the lives of the characters, especially Yost. I understood well Tante Maria’s fears for him and her desire to protect him, even though she knew she couldn’t. Although a caritanae, Yost doesn’t ‘fit’. Unlike the other members of the flock, he loves his family and wants to do all he can to protect them, especially when he discovers that the German officer, ‘Kapitan Death’, is none other than the priest who led the slaughter of the caritanae left on the island when only Yost, Zande and Tata escaped.
I became so involved in the lives of Yost, Zande and Tata in the last book that it was like being back with old friends in this one


Read them both and then get in touch - lots of ways to do that below and let me know who is your favourite character? 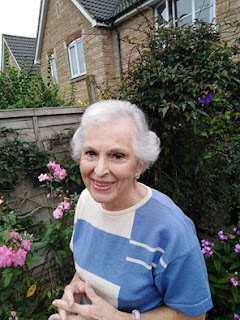 The Year the Swans Came: Buy My Book Here
The Click of a Pebble: Buy my book at Amazon
An Ocean of White Wings: lrd.to/White-Wings