When his family is torn apart and his young brother and sister taken into care, Jem is determined to get them back together again. But what can a 14 year-old boy do in a world dominated by adults? What he really needs is a god whom he can telephone for help, who might just happen to have a spare angel or two to send him. He knows that's pretty stupid. In any case, likely candidates for the role are pretty thin on the ground. There's only Katrina Jones, a hard drinking, wise-cracking, social worker, and Spooky Jarvis who runs foul of the law as often as he has birthdays ... 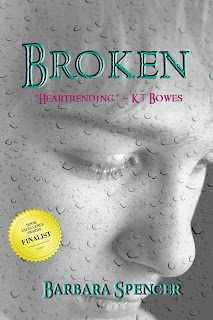 Broken was written in 2010 shortly after Time Breaking. At that time I was living in Glastonbury with my family, my daughter a swimmer. When taking her to the club for training we would pass children sitting on the pavement edge, nothing to do, nowhere to go. Set in the local area of Street and Glastonbury, Broken features many familiar tourist sites, including the rhynes and Glastonbury Tor.

While dealing with a difficult subject, Broken is full of humour - the secondary character, Spooky Jarvis, is my absolute favourite among all the characters I have created.