How We Chose Miss World


“And here is an item of news of particular interest to listeners in Grenada where Miss Jennifer Hosten has given a very good account of herself in the Miss World Competition.” 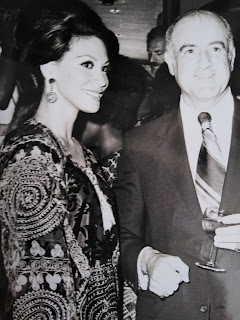 In the history of the Miss World Contest, the 1970 event has to have been the most contentious, disrupted as it was in London by the feminist movement ... and I was part of it. Recently, since the release of the film Misbehaviour starring Keira Knightley and Gugu Mbatha-Raw, a re-run of the contest was shown on television but as Jenny Hosten (Miss World) herself said, it took 48 years for the event to become prominent – and I was there right at the beginning.

In a minute handful of lives, there is a moment, somewhat alike the magical doorway in Alice in Wonderland that lets you in. For me it was a visit to Edgbaston Cricket Ground in Birmingham, where England were playing the West Indies. I was seventeen and wore a lime-green cotton dress with a stand-up collar ... and that day I fell in love with cricket. Little was I to know that on the far side of that doorway was a brilliant career which began when I travelled out to Barbados, some ten years later to watch an entire series.

Obviously the magic didn’t end there, because a couple of years later I found myself gazing out of the window of a LIAT jet on the way to Grenada, to take up the post of head of a secretarial college.
If you are reading this, and are lucky enough to know the country today, it is a whole world away from the country of the late sixties and seventies. In the book, This is Grenada, by Frances Key, I quote:

“The islands of the West Indies are many and varied but—ask a Dutch mate on a freighter, and his eyes light up, and he says, ‘Ah,yes, but there is Grenada.’ From the northernmost Shetlands, The US, UK , Switzerland or Holland, people on their way to other places came —and they stayed. And why do they stay? Grenada is far from perfect. Though it may be just south of paradise it is also just north of frustration.”

Paradise maybe and frustration? Definitely. The electricity regularly failed on a Sunday, just as I was planning to do my ironing; our water tank on the roof was empty more often than it was full. When that happened, I queued at the village tap, filling buckets and bowls, washed in the sea, rinsing off the salt with water from the bucket, and only a couple of stores had the temerity to label themselves  ‘supermarket’ despite not selling fresh milk or meat.

But why would a tiny island – a mere dot in the Caribbean Ocean – even dream of entering Miss World?
That was down to our Premier, The Right Honorable Eric Gairy. A hugely controversial figure, he was arrested by the British and spent, so he told me, his hours of incarceration on a frigate playing billiards with the officers. He wanted Grenada to take its place on the world’s stage and so he invited a handful of us to a meeting at the end of September 1970 and told us what he wanted for Grenada, to enter Miss World.
And he gave us two weeks to get it done!

I was on the contestant sub-committee, which made sense since all my students were girls – and such lovely girls. But despite applying the thumb screw all refused to take part. Backed into a corner, we arranged a Persuasion party – with everyone eligible invited for drinks, hoping simple vanity on seeing the opposition might win out – and it did and we ended up with a handful of entrants.

But not sufficient!
So the Premier stepped in and from that moment, I was in receipt of messages from his secretary with names. All I had to do was contact the girls’ parents and obtain their permission. In a tiny island with a small popular, that sounds an easy task – except it wasn’t, since few families lived in St Georges and most didn’t own a telephone. And we didn’t even have postmen – you collected your mail from the nearest post office which meant it often lay for weeks. And so I became a ‘virtual’ postman. As soon as my class finished after lunch, a police car – sometimes even the Premier’s own limousine – would collect me, and drive me north into the countryside, seeking the family home. 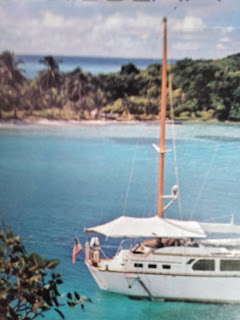 If one has time to enjoy the drive, it is breathtaking, truly paradise. Admittedly the roads were a complete nightmare, with hair-pin bends and gradients that only Grenadians could drive up, but you forgot that when you came across views down into creeks filled with deep blue water in which an elegant white yacht was sheltering. We passed fishing villages too with men hauling in a catch of anchovies, the fish flashing silver in the sun as they leapt to avoid the net. Above, the sky would be busy with hungry sea birds; gull, cormorant and pelican. Occasionally we drove right up into the muntain in search of a particular family and there the air was tinged with the scent of spice – mace and nutmeg – and coco bushes were growing the deep red of their pods hidden among swathes of bushy leaves.

By the time we reached the first of the live shows, I had racked up several punctures, lost seven pounds and my temper, and it was swim suits that did it. The rules stated that contestants had to wear a boneless one-piece swimsuit. Since, no one in the entire island possessed one – girls mostly wore bikinis – it was suggested we should send to London or Barbados to purchase them – in 24 hours! Nothing in Grenada ever happened in 24 hours. One member then became worried about padding suggesting, if we did succeed, should members of the committee personally supervise each girl to check they weren’t padded?

I ask you – today we’d be arrested for even thinking the question! Admittedly, that night we’d had a fair bit to drink. Still, that particular meeting resulted in my first and only victory: that contestants for the first round could wear whatever swim suit (they were called bath suits then) they owned.
But I did end up, with one other female member of the committee, measuring them! Only to discover, they all had the same fault – including Jenny, who flew in from Trinidad to attend. Smaller bust and larger hips. And although 38 ins is small by present day standards, up until then, as far as the annals of the Miss World were concerned, all previous winners had sported the traditional 36-23-36.

Having touched on statistics, here are a few more: we met first in the Premier’s office on the 23rd September; the first show at the Tropical Inn was the 4th October and the final show at the local cinema was scheduled for the 8th October. And between the 4th and the 8th, both one-piece boneless swimsuits had to be found and evening dresses made. I spent those four days obtaining permission for the finalists to be absent from their jobs, their days spent either with dressmakers or learning how to speak and walk.

Of course the theatre was packed - tickets for the event like gold dust. And shortly after 8.30 the Premier, Eric Gairy, arrived, closely followed by our Governor, Dame Hila Bynoe. One of the wonderful idiosyncrasies of our island was the constantly late arrival of the Premier. Since protocol demand he arrive first, I did ask Dame Bynoe how she managed it. She said she hung out of the window to wait for his car go by before leaing! 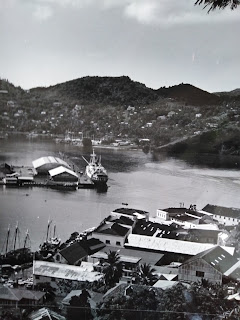 I was told behind the scenes it was horrendous, with artists behaving like prima donnas and finalists having fits of nerves. Still, I had done my duty, the girls were there and I could sit and watch the show. In two weeks, dancers, singers, steel bands and calypsonians, had been gathered together and amongst them were the girls. And once Jenny appeared, it was over. The crowd as one man began to shout for her. A truly wonderful experience to hear the thunderous roar every time she came on stage – albeit awful for the rest, who kept up their brave smiles until the end, although one poor girl was so nervous, she backed off the stage every time. I was so embarrassed because I had spent hours teaching her to pivot.

The rest is history.

I could tell of the night we heard the news and carnival broke out in the streets, or the sheer joy of the people who trekked fourteen-miles across mountain roads to Pearls airport, or the arches of flower that lined the route with people waiting for hours just to catch a glimpse of Jenny, or the smiling faces of the committee, surrounded by popping cameras, lined up on the tarmac waiting for the plane to land – but I won’t.

at June 14, 2020
Email ThisBlogThis!Share to TwitterShare to FacebookShare to Pinterest