This time of the year – Christmas – just in case anyone hasn’t realized it’s already December 16th, I find myself moaning a lot. In fact in my family its become a tradition, rather like carol singing, except my family don't look forward to carol singing.
For example, I hate the fact that far too many people have to work on Christmas Eve which incidentally is my favourite day of the year. I believe at midday on the 24th every shop should close, allowing employees of supermarkets, retailers, enterprise parks, housing Garden Centres and Home Care, to relax and not be too tired the following day to eat their turkey. I also think Boxing Day Sales should be outlawed if it means setting them up on Christmas  Day night. It’s bad enough that the hospitals, police, fire brigade and other essential services need manning, without our aiding and abetting shops to open at the crack of dawn on Boxing Day for the annual sale … or a pint of milk. When isn’t there a sale?.
I also moan about the weather, and the dark nights and mornings, and de-frosting my car. And I wrote about it.

My story today is: 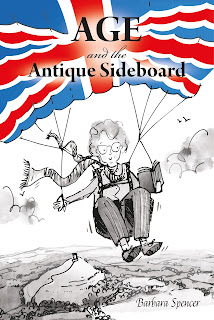 Shame and the glitzy chocolate wrapper

The engineer arrived at my house early this morning to take away my washing machine which had developed a loud clank, interspersed with a worryingly discordant thud.
To unplug it, he had to delve into the cupboard and there he discovered my stash of chocolate. As he pulled it out one bar at a time, I watched it multiply into a mountain range the size of the Alps or Pyrenees (the hills in the UK aren’t big enough).
Hastily I began an earnest prayer to some well-meaning deity asking if they would kindly shift time back to November. Then I might, in smiling and confident tones, explain that the chocolate was bought for the groups of small children who knock on my door at Halloween, chanting Trick or Treat. Then with dewy eyes and a change in tone remark, ‘Sadly, this year, there were fewer than usual.’
That’s when I remembered it was spring and with Christmas in between, it was unlikely he'd have believed me, anyway.
'I'm a children's writer,' I finally elucidated, my red-faced gaze focussed on the brightly coloured packages. 'I get very stressed if a book isn't going well.'
The engineer gave me a funny look, then turned his eye away from the mound of, shall we say it, "the stuff that lasts but a moment in your mouth and a lifetime on your hips." No doubt he was thinking - she either writes a lot of books or spends every waking hour in a state of extreme stress.

Then he pulled out the washing machine.

Sixteen years’ worth of frozen peas, peanuts, biscuit crumbs, and dried up raisins came with it, plus, a large handful of dead flies and spiders.
That’s when I fervently wished a hole of substantial proportions would appear under my feet.
I could have died with mortification.
After he left, I became so stressed at being found delinquent in the housekeeping department that I drank several cups of coffee and scoffed half my stash, whilst washing the floor and removing the debris.
Then I was struck by the most awful thought.
What if he had actually counted the number of bars in the cupboard before he left with my broken machine? Maybe I’d better hurry out to the shops and replace them, in case, when he returns with my mended machine, he thinks I’ve eaten them.

at January 09, 2019
Email ThisBlogThis!Share to TwitterShare to FacebookShare to Pinterest