I’m a traditionalist – that is I believe in bookshops more than the web. Indeed, I still regard the web as something strange, like manna dropped from heaven. The fact that it is interactive blows my mind and I so wish I understood how noughts and crosses could connect you with someone several thousand miles away in less time than it takes for me to type noughts and crosses.  One or two generations down the line – the situation is very different. Yesterday, trying to decide whether it was worth driving to Glastonbury – it was raining at the time – my daughter and her boyfriend dialled up their phones to check the progress of the storm clouds.
I have proved equally inept at social media, despite hours of input and chat, liking and sharing, output remains desultory, as my royalty cheques from Amazon prove. Of course, I may well have shot myself in the foot by changing genres and age groups at such a late stage in my writing life. For that you can blame ‘Girl with a Pearl Earring’ and ‘The Minaturist’ So after 12 years or more writing for children and ya’s, I now write fantasy for adults/top teens. The Year the Swans Came – was published at the end of October, with Book 1 of the trilogy, Children of Zeus, in 2019
And so, since all other methods seem redundant, as the doyenne of classrooms and lecture halls, I have decided to talk my way into social media, hence Sunday night videos sessions.  Once, I get the technology sorted, I will pick out short stories from other writers and read those. So do stay with me!
Having said all that: my piece today is: Going Bananas.

Did you know fishing is the most popular sport in Britain? I didn’t. When I did think about it, I found myself speculating as to whether an activity, which consists of catching a fish and throwing it back in again, can ever be called sporting.
Be that as it may; according to officialdom fishing is still more popular than golf. Although, if you really come to think about it, chasing a white ball for five miles is pretty silly too!
Nevertheless, I am convinced that statistics will support the statement that golfers consume more bananas than any other sporting group.
Golfers, the length and breadth of Britain, have discovered the magical properties of slow release carbohydrates which sustain them until they hole out on the 18th, while the skins, nonchalantly flicked into the bushes, provide food for birds or compost for the ground.
Among golfers, therefore, the commonplace banana has acquired an almost mystical reputation.
'Would you like a banana? I've brought two,' will follow a particularly nasty slice on the 10th, which lands your ball in the woods, and your partner trying to conceal his/her irritation.
And missing a 6ft putt on the fourth will initiate immediate consumption of a banana, since you are totally convinced that its healing powers will remedy your tendency to pull your putts. In which case, a similar distance on the 5th green will prove no problem.
It comes as no surprise, therefore, when faced with playing an Open on an unknown course in Cornwall, I decided to buy some bananas. At that point, little did I realise my search would take me the length and breadth of the county, before arriving at the inescapable conclusion that bananas have never been heard of south of Devon.

The reaction which greeted my polite enquiry was similar to that of a greengrocer in the Second World War, whose shop contained one orange.
Having discovered that the words, 'Country Store', which in Somerset heralds a roadside fruit and veg stand, related to corrugated sheds spewing out paving stones and lengths of wood (believe me I visited five), I decided to check out all the villages along the A392. Someone, somewhere, has to sell bananas.
Cornwall is to be complimented on the quality of its 'A' roads. Superbly maintained, they unfailingly indicate the whereabouts of a tourist attraction or village. Unfortunately, once off the highway you plunge into cavernous single-track lanes, guarded by tall hedges. And it is only when you come across a signpost to yet another village that you realise you have already passed the one you were seeking … it was those half-dozen houses you passed a while back with a pub, but no shop selling bananas.
Bloody-mindedly I fought on, politely pulling into narrow passing zones to allow oncoming traffic to proceed, from time to time catching an elusive gleam of water through dense hedgerows, becoming more and more convinced that I would stumble across a mysterious Frenchman, aboard his yacht, 'The Seagull' in some watery creek.
Finally, I gave up and returned to the main road.
Exhausted I drove back to St Austell, eventually passing through a proper village, which boasted a sub-post office selling comestibles but no bananas. Surely, there has to be a vegetable shop on the periphery of St Austell? There wasn't or if there was, I didn't see it.
In sombre mood I set off for the golf course – banana-less …

…and had a most disgusting round.

I did eventually discover Tesco who, as everyone knows, sells bananas, although that was not until I was heading back to Somerset at the end of this ‘never to be forgotten’ day, the responsibility for which I lay entirely on my lack of bananas. The store in question lay on the far side of St. Austell heading towards Liskeard, which was a fat lot of use.

Do you remember our alarmist cry when supermarkets first appeared: 'You mark my words, small shops will die out?'

They have!
At least the ones selling bananas have.
The Machiavellian plot of Tesco, Sainsbury and the like, is almost complete. The only thing left to be done is for town planners to include a supermarket logo on all road signs: A392, Liskeard, Plymouth and Tesco Superstore. Otherwise golfers will never be able to find bananas in a strange town. 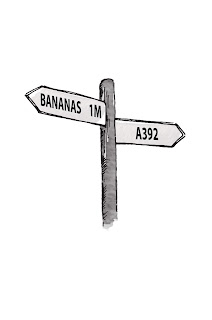 Join me every Sunday at 6pm live on :www.facebook.com/BarbaraSpencerBooks

at January 06, 2019
Email ThisBlogThis!Share to TwitterShare to FacebookShare to Pinterest